With each trip in and out of the snow encrusted river, layer upon layer of ice built up on my waders, forming a frigid exoskeleton around my legs. I knew from experience not to tie the laces of my boots tightly, having become trapped in my waders as I waited for my boots to thaw a few times before. Sometimes, when air temperatures dropped to -20F, the wire mesh of our traps would freeze instantly to our skin every time we hauled one out of the holes we had chiseled through the ice. Many passersby asked what we were doing, and none correctly guessed we were looking for giant aquatic salamanders. Mudpuppies, large salamanders native to lakes and rivers in the Great Lakes region and upper Mississippi River drainage, spend their entire lives underwater. While the larvae of all salamanders have gills, a few species keep those gills as adults. Axolotls, a species commonly kept in captivity, are one notable example, and so are Mudpuppies. Those gills, which look almost like bright red feather dusters on the back of their heads, are one of the most noticeable things about the Mudpuppy, whose bodies are mostly gray or brown with darker gray mottling. Maxing out at almost a foot and a half long, it’s their size that gets most folk’s attention. 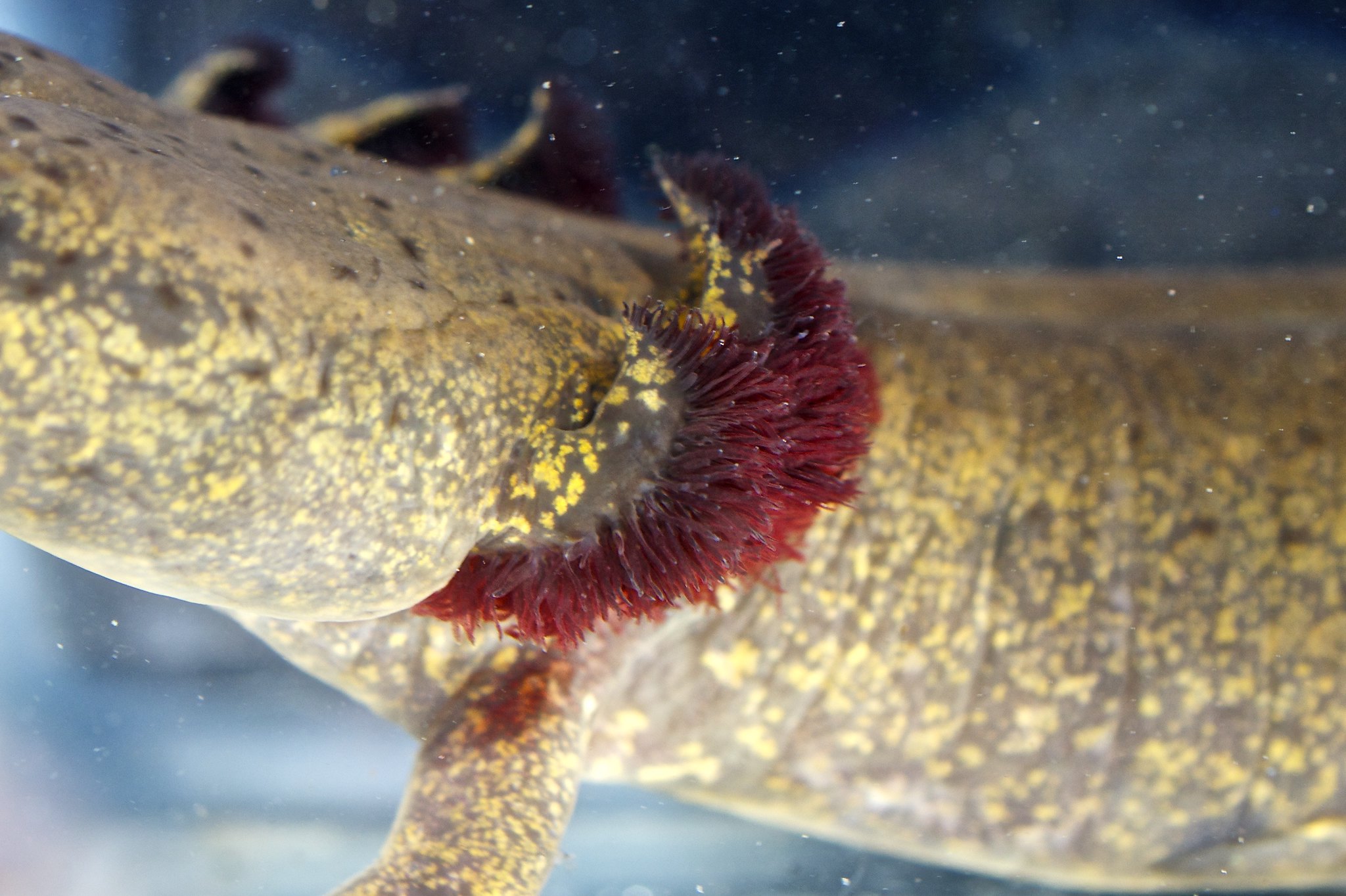 There is some confusion about what is and is not a Mudpuppy. A lot of people use the word mudpuppy to describe any larval salamander with gills, similar to how larval frogs are called tadpoles. This likely stems from many field guides only showing illustrations of adult amphibians. When people find a baby gilled salamander in a pond or stream and look it up in a book, the only drawing of a salamander with gills they will find is that of a Mudpuppy. The gilled larvae of most other salamanders are small, up to a few inches, which helps set them apart from the true Mudpuppy, Necturus maculosus. You also aren’t likely to find a true Mudpuppy in a backyard pond, springhouse, upland marsh, or mountain stream. 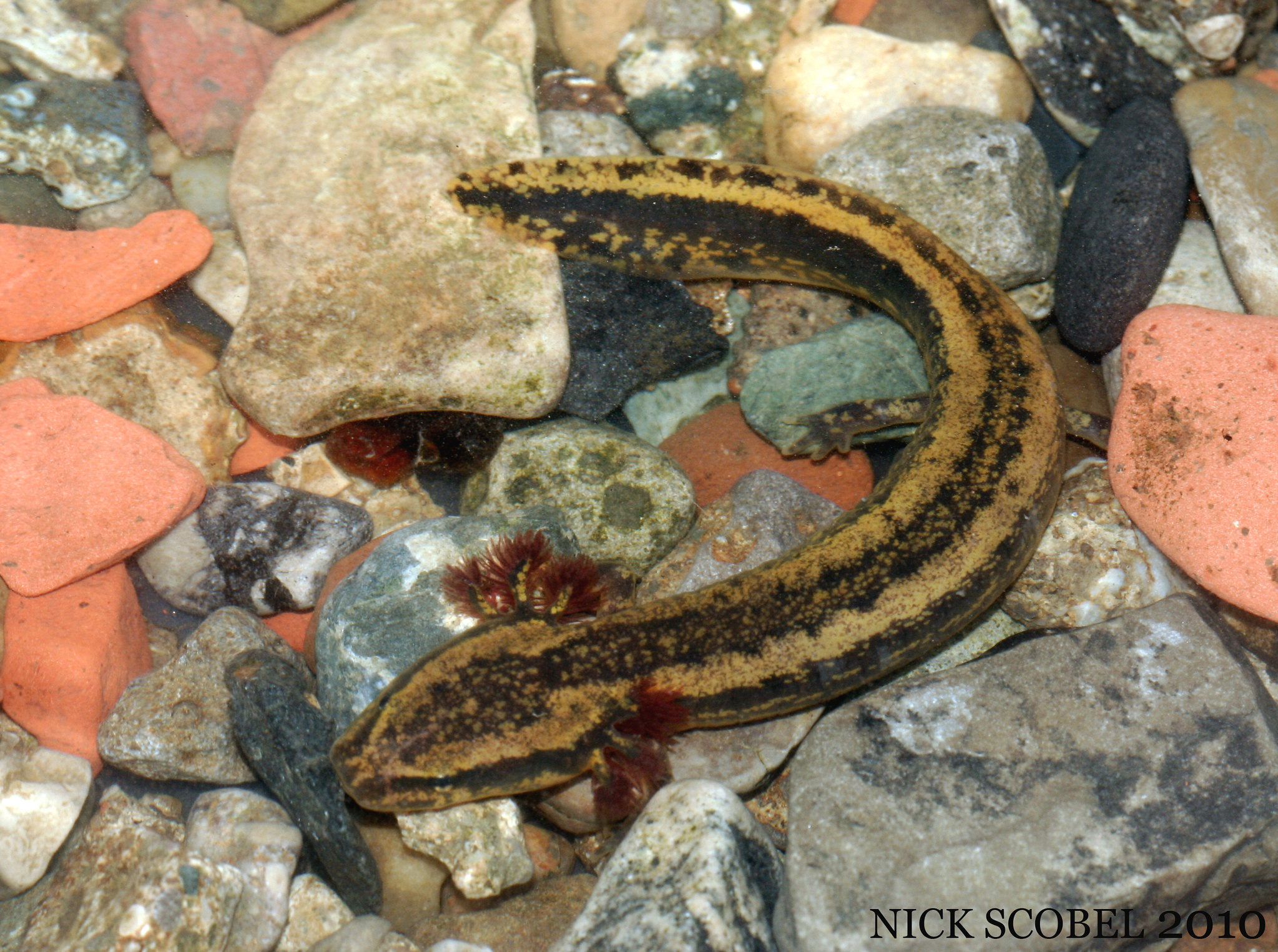 The coloration of larval Mudpuppies is different from adults, with dark stripes down the back and side, separated by tan or yellowish bands. Mudpuppies develop their adult coloration at around 4-6 inches in length.

Although very few people ever see a Mudpuppy in the wild, MANY medical and biology students will know of the species from anatomy labs because they are often used as dissection specimens. Today, the dissection specimens purchased from biological supply companies arrive at college campuses dead, fixed in a preservative, but that was not always the case. Introduced populations of Mudpuppies in the Connecticut River and a handful of lakes in Maine are almost certainly the result of leftover Mudpuppies being released when they were no longer needed at the end of the semester.

Recently, genetic information showed that the Connecticut River Mudpuppies hail from the upper Mississippi River drainage, possibly Minnesota, almost a thousand miles from where they reside today. Apart from bewildering the occasional ice fisherman, these non-native Mudpuppies don’t seem to be doing harm to the ecosystem, but that is an area where more research is needed.

Similar to most other amphibians, Mudpuppies will eat anything that moves that they think can fit in their mouth, as well as anything dead they can scavenge. Insects, small fish, mollusks, earthworms, and even crayfish are common prey items. In the Mudpuppy study I was involved with after college, we often captured crayfish in our traps, or sometimes a Mudpuppy and a pair of loose crayfish claws.

Mudpuppies eat a variety of prey, and we routinely found pairs of crayfish claws in our traps along with Mudpuppies, suggesting the giant salamanders had no qualms about eating while waiting to be released.

Although common across much of their range, Mudpuppies are declining in some areas. Due to their secretive nature, the status of their populations in many places remains a mystery. Like other amphibians, Mudpuppies are sensitive to pollution and poor water quality. In much of the Great Lakes region, efforts from wildlife agencies to combat populations of sea lamprey, a parasitic fish, also harm Mudpuppies. Pesticides used in streams to kill larval lamprey sometimes kill Mudpuppies in alarming numbers. Understanding how pollution and lampricides impact Mudpuppies at a broader scale is an area where much more research is needed.

So, why were we looking for Mudpuppies in the dead of winter? In an effort to better understand the status of the local Mudpuppy population, I was hired as a technician to assist a graduate student at the University of Vermont in developing a method to assess Mudpuppy populations in the Lake Champlain basin. Curiously, during the cold season when almost every other northeastern amphibian is dormant, the Mudpuppy is most active. Even when air temperatures are -20F, at the bottom of a river a Mudpuppy never quite experiences freezing temperatures. Try as we might, catching Mudpuppies in the summer is extremely difficult, so, winter it must be.

One of the most common ways that people encounter Mudpuppies is while ice fishing. It is important to return them to the water as soon as they can be unhooked when this happens.

Hauling the salamanders up to the surface, however, risks exposing them to fatally cold air. For their safety, we made sure the salamanders were in constant contact with water as we moved them from traps into buckets on cold days. We would then transport them to our truck where we could measure and tag the pups in relative warmth before returning them to their icy homes.

My time trekking across ice-locked rivers and wading through frigid water in search of Mudpuppies is not how I expected to begin my career as a herpetologist. Believe it or not, those days rank highly among my memories from my first few years out of college. Before I got that job, the Mudpuppy was Vermont’s only amphibian I had never seen in the wild and I refused to leave the state for work before finding at least one. Thanks to being in the right place at the right time, I was fortunate to land a job in-state that allowed me to see hundreds, and to get to know the Mudpuppy on a level that few people ever will. The job wasn’t easy, and it wasn’t always fun, but even the hardest of times from those years make splendid memories today.

To learn more about the Mudpuppy project I was involved with, check out a recent publication by the graduate student, Isaac Chellman, who I worked for as a technician:
Estimating Mudpuppy (Necturus maculosus) Abundance in the Lamoille River, Vermont, USA 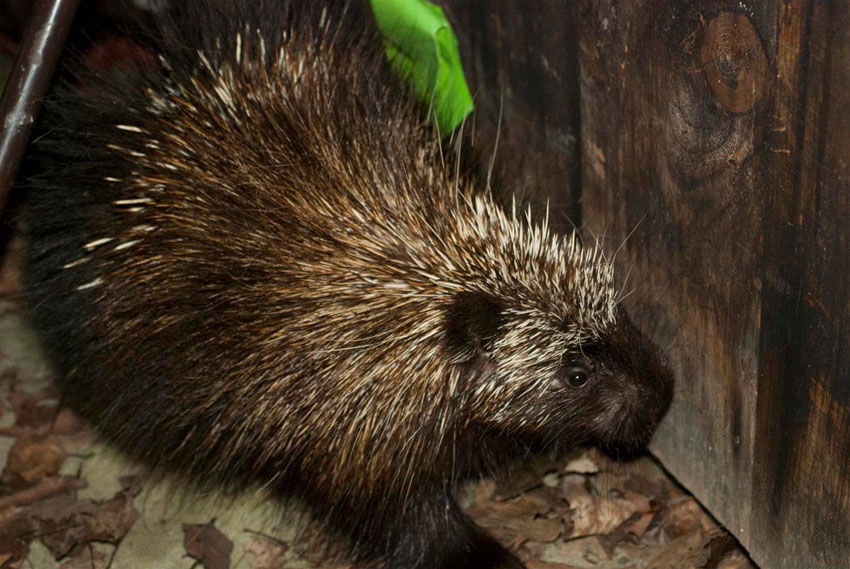 Photo of the Month: Gopher Tortoise