More than just camouflage: relationships between snake patterns and behaviors.

Have you ever wondered why some snakes have stripes, others are banded or spotted, and some are uniform in color? It isn’t always clear why an animal is patterned or colored one way or another, but nature is rarely random. For example, a bird might have a light belly to blend in with the bright sky when viewed from below, and a dark top to blend in with the ground or water when viewed from above, which helps hide them from both their prey and predators alike. Snakes are great examples of how colors and patterns represent function over form. Remarkably, without knowing anything else about a snake species, you can even make an educated guess about their hunting and defensive behaviors just by looking at their pattern. 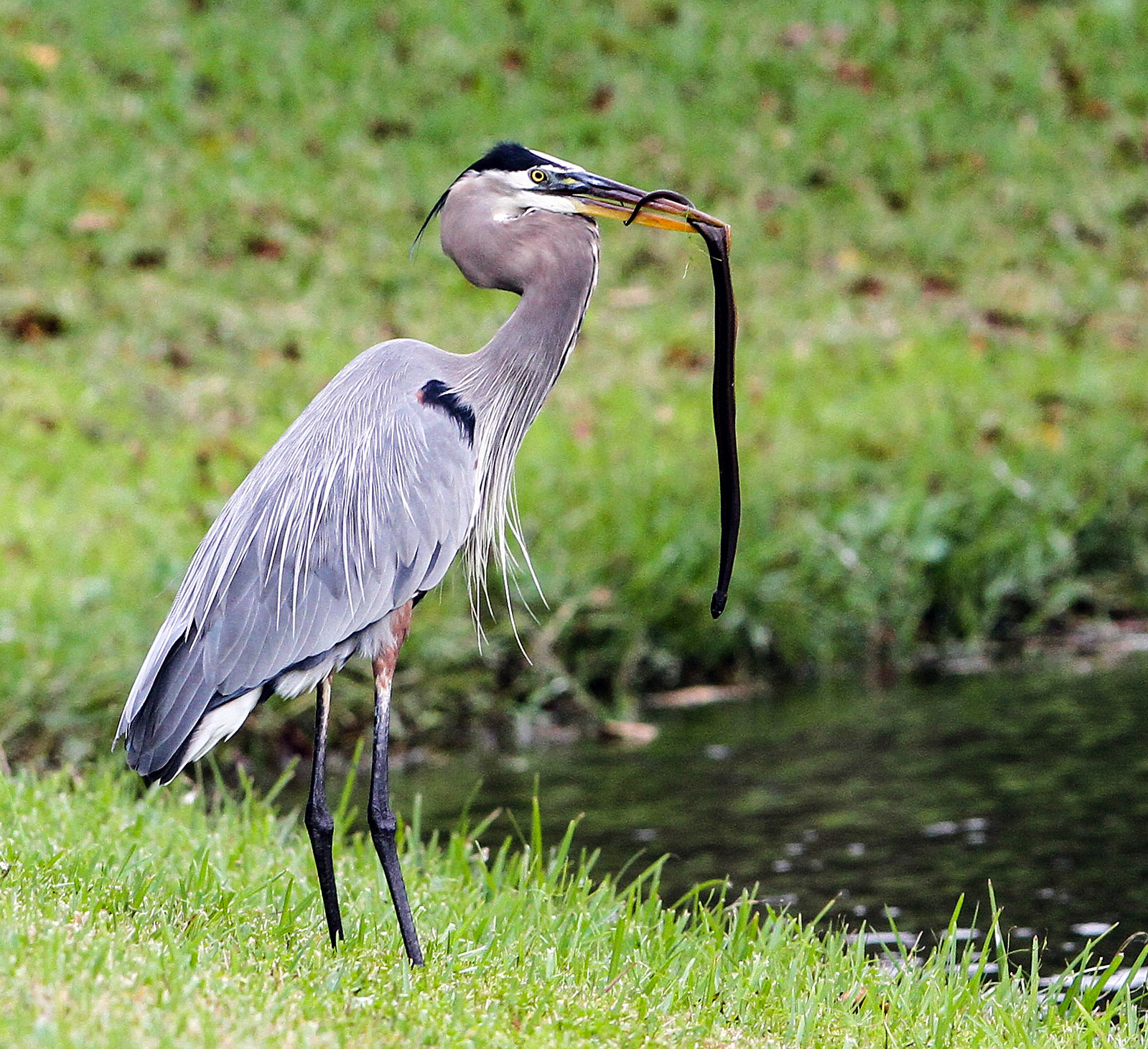 Although snakes have generally poor eyesight themselves, many of their prey and predator species have very keen eyesight, and the patterns of most snakes can be linked to how they either hunt their prey or evade their predators.

Generally speaking, snakes have poor eyesight and rely heavily on their sense of smell to navigate the world, but they hunt or are hunted by animals with very good vision. Frogs make up a large part of an Eastern Gartersnake’s diet, and frogs have a keen eye for detecting movement and can see nearly 360 degrees around their head without moving. Gartersnakes are also hunted by herons, which can zero in on the slightest movement with near laser precision. So, while vision may take a back seat to the snake’s sense of smell, snakes live in a very visual world, and their patterns are far from decorative.

Patterns on snakes fall mostly into a few basic categories: uniform coloration, striped lengthwise, banded/blotched, and spotted. As it turns out, those different patterns correspond closely with a given species’ behavior, which a 2013 study by researchers at the University of Bristol sheds some light on. Snakes with solid coloration tend to have very active hunting strategies and may chase down their prey. Those with lengthwise stripes rarely hold their ground when threatened and try to make speedy escapes. Many banded or blotched snakes are ambush hunters, do not move quickly, and have comparatively pungent musk. And, spotted snakes rarely venture away from cover where they can hide, such as dense vegetation.

With striped snakes, speedy escapes are made easier by their pattern. Without any banding, spots, or legs, it difficult for predators gauge their speed. When a weasel tries to pounce on a Ribbonsnake, for example, the snake might be farther ahead than the weasel realizes, keeping the snake one step ahead until the weasel loses track of it. Ribbonsnakes, as well as other striped species, tend to be fast and are quick to flee from predators, humans, and other threats. Speaking from experience, trying to catch a Ribbonsnake as it darts through dense brush is no simple task. I have lost track of how many times I’ve grabbed for the snake, only to get a handful of prickers and then see the snake several feet away, or nowhere at all. 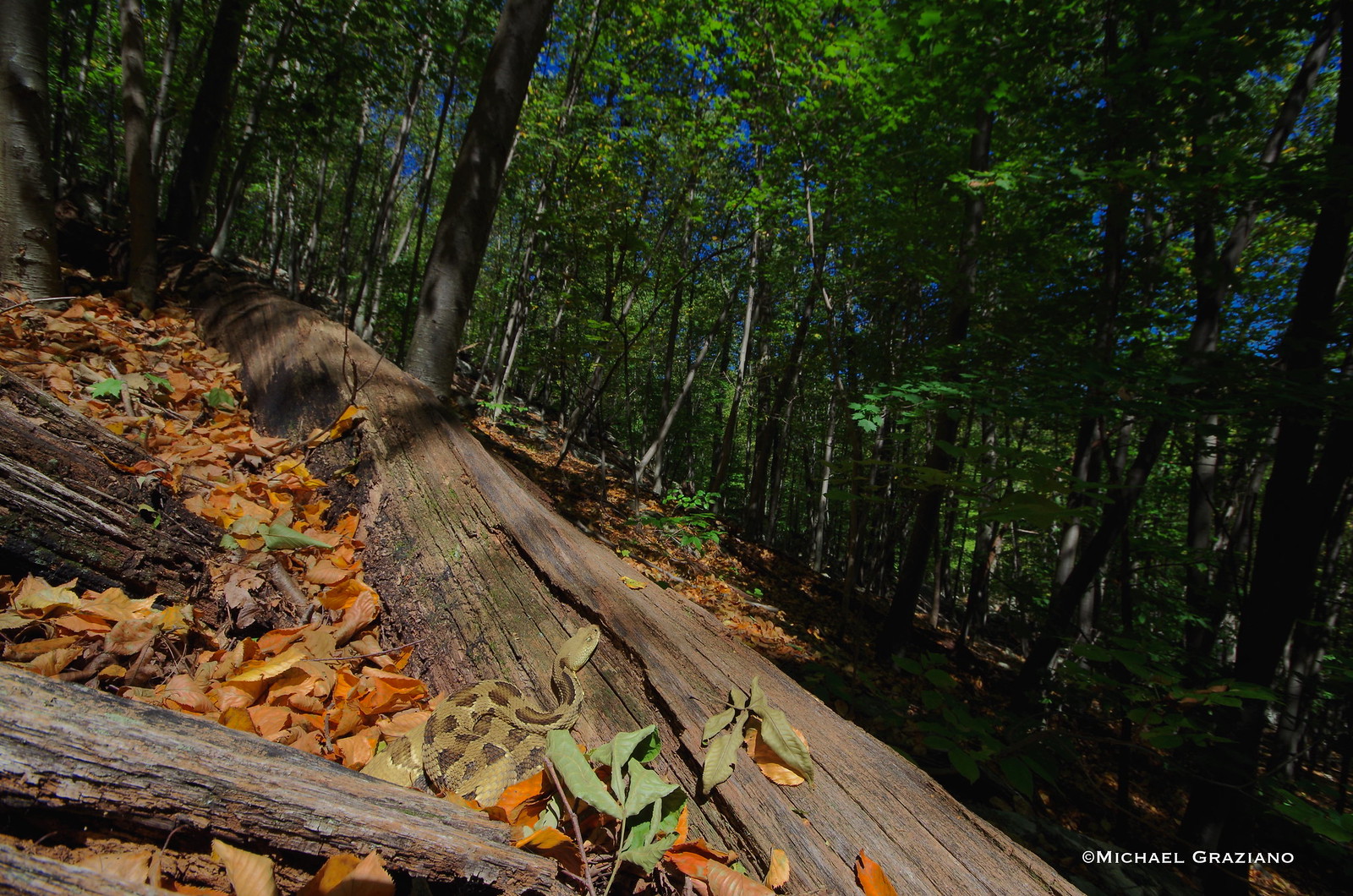 Many banded snakes are also ambush predators, such as this Timber Rattlesnake. Banding is useful as camouflage, but only when a snake is motionless, so Timber Rattlesnakes posture themselves against logs and wait for a mouse to haplessly wander within striking distance. The slightest movement, however, and the rattlesnake’s cover is blown.

Rather than flee, banded and blotched snakes often hold their ground and sometimes strike towards an approaching predator, even if their bite is harmless and the predator is far from reach. Although the vast majority banded North American snakes are not venomous and are just bluffing when they put on these defensive displays, nearly every species of venomous snake we do have is banded. Banded snakes that aren’t venomous  possess some of the most putrid and potent musks out there, so, venom or not, banded snakes make their capture as unpleasant for a predator as possible. Adding to that, banded snakes often puff up while facing a predator to make themselves look big and more intimidating. While it is not discussed in any literature I have found, it would not surprise me if side-to-side banding draws a predator’s attention to the thickness of the snake, increasing its perceived size. Many of these banded snakes are also ambush predators and remain motionless until unsuspecting prey haplessly wanders too close. The banding serves as camouflage while motionless, but, move even a fraction of an inch, and their cover is blown, a problem not shared by snakes that have solid coloration.

Being a solid color is great for snakes that chase down their prey, especially if that color matches that of their habitat. Smooth Greensnakes, which feed primarily on insects, move swiftly through the grass, even bobbing their head to mimic a leaf fluttering in the wind. They blend in nearly perfectly with their grassland habitat until grabbing a cricket that was unaware of the approaching threat. Solid coloration also helps when fleeing predators, but perhaps not quite as well as lengthwise stripes, especially when the color of their habitat does not match the color of their skin.

The trends between behavior and pattern are supported pretty well by data, but the explanations about why those trends exist shouldn’t be taken as fact. At this point, they are just good theories that make a lot of sense. With some other types of snake patterns, the ‘why’ isn’t quite as clear. Spotted snakes are often habitat and prey generalists that stay close to cover, so large spots may be a sort of general purpose camouflage. Flecking, checkerboard patterns, and speckles may serve as camouflage when a snake is motionless, but the specks get lost in a blur when the snake is moving quickly, making the snake appear uniform in color and making it a little harder to catch. That all makes sense, but it’s a bit more of a stretch.

I would be remiss not to mention bright colors and mimicry. Bright red or orange in wild animals usually means an animal is venomous or toxic, such as coralsnakes. Some harmless species that want you to think they are dangerous mimic the appearance of a venomous species, and several harmless snake species, such as certain milksnakes, copy the red, yellow, and black bands of the coral. While the bright colors make the harmless snake easier to spot, by copying the venomous species, many predators leave them alone out of an abundance of caution. In such cases, the pattern of the mimic doesn’t necessarily correspond to its behavior.

Why any animal has the color and pattern it does can get fairly complicated, and sometimes we’re left to guess. The point is that patterns in wildlife do mean something. Much in the same way that the shape of a bird’s beak can be used to predict its diet and hunting strategy, a snake’s pattern says a lot about how it hunts for food and evades its predators.

For a deeper dive into this topic, the paper describing the links and subtleties between snake colors and patterns can be downloaded for free from the Behavioral Ecology journal by visiting this link: https://academic.oup.com/beheco/article-pdf/24/5/1237/14090437/art058.pdf