Invasive species are one of the greatest threats to biodiversity facing our native plants and animals today. While not every exotic species moved to a new region by humans becomes problematic to native biodiversity, it is difficult to draw a line where a plant, animal, or pathogen is considered invasive vs. just non-native. Most species do not fare well when moved to new environments by humans, either due to harsh environmental conditions or an inability to compete with the species already there, but sometimes the new arrival does very well. And if that new species has a competitive edge over their native counterparts, their populations can skyrocket. Invasive species can spread rapidly in range and number, and can overwhelm ecosystems, driving native plants and animals into sharp decline. In Florida, for example, Cuban Treefrogs are not only outcompeting native treefrogs for food and shelter, but eating the native frogs as well. Unlike Florida, which supports a whopping 60+ species of invasive reptile and amphibian, up here in Vermont, harsh winters stop most introduced “herptiles” in their tracks, literally. We have plenty of invasive plants, insects, fish, etc., and it is only a matter of time before we get our first invasive reptile or amphibian. Quite likely, our first will be the Red-eared Slider, a large turtle native to the Southeastern United States. 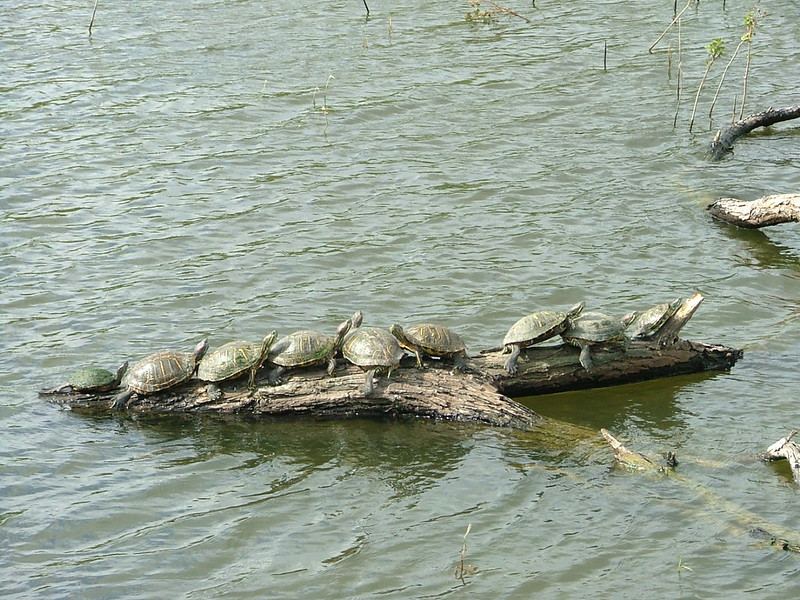 When sliders bask in high densities, smaller and more timid species may be prevented from sunning themselves.

Turtles are not generally good at colonizing new territories. Their slow growth, low reproductive rates, limited ability to disperse over land (in the case of aquatic species), and high levels of egg and juvenile mortality stack the odds against them, and the vast majority of turtle species in the world are in decline. Red-eared Sliders are an exception, and are highly adaptable to new environments, including cold climates far removed from the lowland wetlands they hail from in the southeastern United States. Red-eared Sliders grow fast compared to other turtles, can eat just about any plant or animal they can get their beaks around, and are aggressive toward other turtles. So, when sliders end up in new places, they do alright, and because they live for decades, a lone individual can persist in solidarity for many years before a potential mate arrives. Like other aquatic turtles, Red-eared Sliders are not great at dispersing over land, but they don’t need to be. Humans have moved them all over the globe by the hundreds of millions. 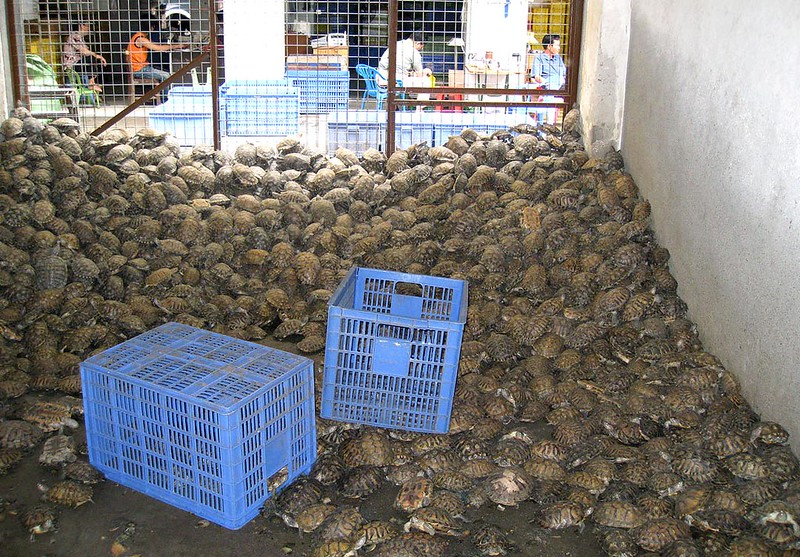 Thousands of Red-eared Sliders in an Asian market, likely exported from the United States.

You have seen one before. These aquatic turtles are mostly green as hatchlings, but adults get about a foot long, have smooth dark shells, yellow lines on their neck and legs, and a red patch on each side of the head (although some older individuals become nearly entirely black and other subspecies lack the red ear patch). Beginning around the 1950s, Red-eared Sliders were commonly sold as hatchlings at city corner pet shops and flea markets to children and adults with little idea as to their care requirements, how large they get, or that they can live for up to 40 years. Globally, around three to four million are exported from the United States every year, many to be sold in food markets, with the rest sold as pets, sometimes as disposable trinkets. Both here and abroad, many people who keep them as pets eventually get to a point when they can no longer care for them, but finding a suitable home for sliders (and most other aquatic turtles) can be very difficult, and turtle rescues do not have the capacity to handle them. For example, the New York Turtle and Tortoise Society website states:

“Unfortunately, NYTTS is no longer able to accept unwanted red-eared sliders for adoption. The high numbers of these turtles that have come our way in recent years have completely overwhelmed our ability to find homes or placements for them. We have received many thousands of slider turtles, and there simply aren’t enough resources or space for us to accommodate them, even on a temporary basis.” 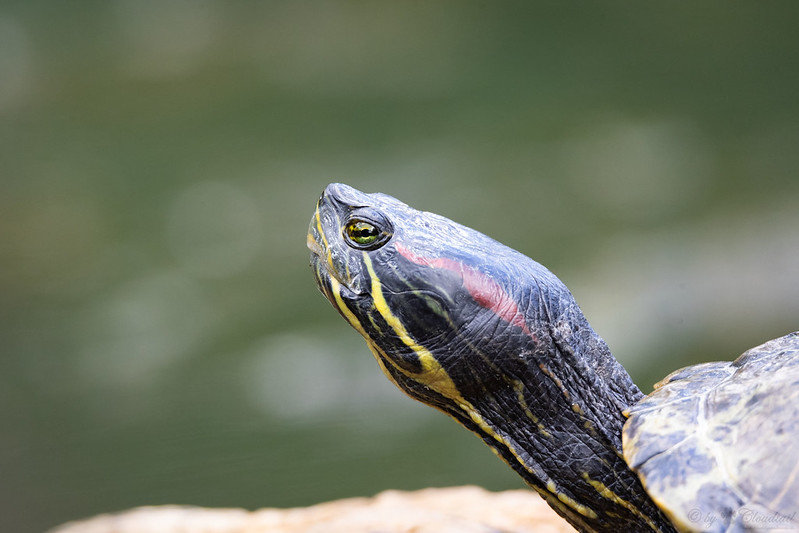 Yellow stripes on the head and legs, and a red patch on each side of the head, are good field marks to identify Red-eared Sliders, but other slider species lack the red patch and otherwise look very similar.

You will find similar text on the website of almost every single reptile rescue. Yet, instead of encouraging adoptions, many pet stores, especially big corporations, continue to sell young sliders at impulse purchase prices, fueling the problem even further. Consequently, when people cannot find homes for the turtles they can no longer care for, some choose to release their sliders into the wild without realizing that doing so is illegal and poses significant threat to our native turtles and other wildlife. This has lead, in part, to Red-eared Sliders becoming the most widespread and abundant turtle in the entire world.

In the northeastern US, sliders have established breeding populations in every single state EXCEPT Vermont and possibly New Hampshire (as far as we know). Populations have been introduced to China, much of Europe, India, Canada, Brazil, and more. In many of those places the slider populations continue to grow, threatening native turtles. Not only can sliders outcompete native turtles for food and basking resources, but they can also spread parasites and disease from captivity of their native range to new areas. Case in point, a study in Spain and France found that in waterbodies with feral populations of sliders, native Mediterranean Pond Turtles were infected with flatworm parasites that commonly infect turtles in the Southeastern United States. With the spread of sliders, so too are their parasites on the move. Another study found that when resources are limited, sliders outcompete other turtles for food, resulting stunted growth among the other species. Although many lakes and ponds in Vermont may be too cold at present to support breeding populations of sliders, it is only a matter of time before we have them in Lake Champlain, which might be the nail in the coffin for our critically endangered population of Spiny Softshells.

So, what can you do to help your native turtles and slow the spread of sliders? First and foremost, if you are new to turtles and want one as a pet, do a lot of research before adopting one, and really ask yourself whether getting one is a good idea. Turtles are a lot more work than most people realize, and skimping on proper housing and care will result in an unpleasant experience for both you and the turtle. Just because turtles are awesome and you want one now doesn’t mean you will be excited about still having one in ten years, and turtles should be thought of a very long term commitment (some species easily live past 100). Also, please do not buy a slider at a store. It is very easy to find sliders for sale or for free on classified pages such as Craigslist. Alternatively, ask a manager at your local pet store if they know of anybody looking to adopt out a slider. People often ask pet stores if they can take their pet turtles, and while stores usually say no, some maintain waiting lists of people hoping to rehome their turtles. Or, search google for reptile rescues in your area. Even if the rescue cannot accept sliders, I can almost guarantee they have recently been approached by someone hoping to get rid of a turtle. By adopting one in need of a home instead of purchasing one from a store, you are not only helping get that turtle out of a potentially bad situation, but also doing a huge favor to the native turtles in your area. And, perhaps most importantly, research turtle ownership laws in your state. Many states have banned ownership and sales of sliders due to the risk the species poses to native wildlife.

If you have a slider (or any other turtle) that you cannot keep anymore, please do not release it to the wild under any circumstances, even if sliders are native or well-established in your area. Reach out to rescues and pet stores to put your name on their waiting lists, post an ad on Craigslist or Facebook, or contact your state wildlife department for guidance. I won’t lie, finding a home for your turtle might not be easy, but releasing it to the wild creates far more problems than it solves. I love turtles, but because I love turtles I am also very glad that we do not yet have breeding populations of Red-eared Sliders here in Vermont. Let’s try to keep it that way, and also do our best to limit the spread of sliders in places they have already been introduced.